This enjoyment comes from

At the 2006 Changeover our resident poet Derek showed how well we know each other:

Monique thought she couldn’t be the president of Rotary But now she has, and done it well She says she’d like another spell

She likes to boss the men around And if we’re silly Billies she says she’ll get her needle out and tattoo all our…. arms about

He takes our money, keeps the books and than he reads the roll He’s so much bigger than he looks This man from Portugal 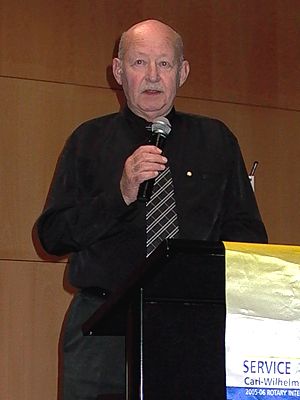 Now there’s a man with the perfect head

She recently joined Rotary And if it’s her intent to stay the course, I think some day
she’ll be our president

He’s going to be our sergeant And when we’re fined, you’ll see he’ll want to add insurance Airport tax and GST

For those of you not mentioned I beg you, don’t dismay I’ll get to know you better And there’ll be another day when I sit at my desk again some poetry to write But in the meantime boys & girls I bid you all Goodnight

Get in Touch. Get Involved.

Meetings are held every Wednesday at 6pm but check our calender for our latest schedule.