Within Rotary there are 5 avenues of service, one of which is assisting others in our International community.

Rotary Waitakere has a major involvement in “hands on” projects in Vanuatu – a country within our Rotary District of 9910.
The advantage of Rotarians taking a “hands on” approach to island projects with major help from the locals was summed up nicely by one villager.
“We love it when the Rotarians come as we learn so much!”

The Rotary Club of Whangaparaoa has taken on the massive job of long deferred maintenance at this school with the help of a number of other Clubs and The Rotary Foundation. Waitakere Rotary are one of the Clubs assisting with this project.

Maintenance required at the school. Number one job is to replace the rusty corrugated iron roofs.

The Waitakere Rotary report on the project 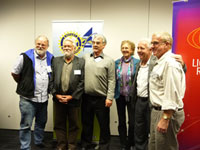 Our intrepidWaitakere Rotary travellers set out for the island on Friday 29th August 2014 for a week of hard work.

For once their luggage wasn’t full of tools and various materials as, due to the scale of the project, these all went over in a container first.

Peter Wilson from Whangaparaoa sent an interesting report on the joys of delivering a container to a remote island in the Pacific! 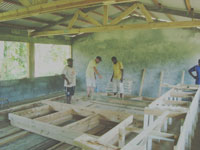 Early in 2011 Rotary Waitakere was approached by the Rotary District 9910 International team and asked if we could help Orap School on Malekula Island.

First Trip: What is needed?
Craiger and Kerry went to the island for 4 days in June 2011 to scope out the work required and to perform a few repairs whilst they were there.

More details are in our 6th July 2011 Bulletin 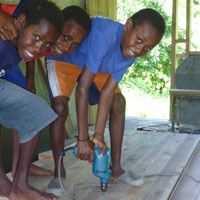 In May 2012 a team of Rotarians and skilled friends went to the school over a two week period and, with the help of the local villagers, achieved the following:

Report on the school

In 2007 we set out to finish an incomplete Aid Station on the island.
Thanks to a major earthquake on 29th May 2009 projects grew from there…

Water tanks or “wells” are square or rectangular and were built of concrete – usually without reinforcing. 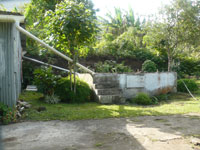 This was built of concrete with vertical reinforcing only. It cracked down all 4 corners

After participating in joint Australia/New Zealand projects at Port Vila Hospital in Vanuatu two of our members set out to find a project that we could call our own.

After a great deal of communication with both Port Vila Rotary and the Peace Corps they found it. An incomplete Aid Station on the island of Tongoa in Vanuatu.

The Aid Station was started in 1994 but not finished. The villagers from the two villages it was designed to serve – Meriu and Bonga Bonga – were still faced with a one and a half hour walk over the mountain to the nearest hospital for anything more than a cut finger. Child birth expeditions were interesting – and not always successful. Women and their babies have died on the trek over the mountain.

Craiger and Kerry went to the island to scope out the work needed to be done to finish the Aid Station – and whilst they were there started tiling the floor and installed a toilet (no water yet) and built a septic tank.

Second Trip: Work starts in earnest
On this trip a larger team consisting of five people – Kerry, Alan & Heather, Theo & Monique – went, sorted out the water supply to the Aid Station (hey, the toilet now flushes!), added a sink, did more tiling and completed a lot of the painting.
For more details and videos of this project check out our Aid Station page 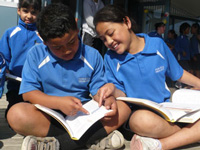 Third Trip: Aid Station completion
On our third (and supposedly final) trip in June 2009 we not only finished the Aid Station at Bongabonga, complete with Official Opening, but also supplied and installed two new watertanks in neighbouring Meriu Village – and provided books and information to the villages’ joint school on earthquakes.

The island had been badly damaged in an earthquake on 29th May – two weeks prior to our trip. The local hospital sustained damage along with many other buildings – and 80% of the island’s concrete tanks cracked.

The completion of the Aid Station came at the right time. It was promptly upgraded to a dispensary due to damage to other health buildings on the island.

Fourth Trip: Bongabonga tank repair
In a matter of seconds in the May 2009 earthquake the large tank supplying the bulk of the water to Bongabonga Village cracked in all 4 corners.

After due thought our boys came up with a solution – a double skinned liner. Kerry, Craiger and Phil, a Rotarian Engineer from New Lynn Rotary, went to the island and the entire village turned out to help install it.

Phil also checked out the temporarily closed school for structural damage and designed a solution.

Fifth Trip: Repairs to the school
Rotary Waitakere organized, co-ordinated, and arranged the funding for repairs to the primary school that was damaged in the major earthquake on 29th May 2009.

Whilst none of our members were able to go on the trip (Rotarians pay their own airfares and it was a little too close to our last trip for comfort) a team of other Rotarians in our district took up the challenge and repaired both the school and the severely damaged school water tank using the materials that we supplied.

Whangaparaoa Rotary have now adopted the island and have more plans for future work – including the High School over the hill. 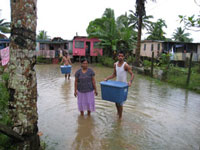 When disaster strikes the Island Nations – Floods in Fiji, Tsunami in Samoa… Rotary quickly swings into action by supplying pre-packed “Emergency Response Kits” to those who have lost everything.

Over time many of the Rotary Clubs around the world provide funding ($NZ600) for a box and these are strored in warehouses near major airports ready for “Go!”

The boxes, that once emptied can be used for water storage, contain a carefully selected set of items from cooking pots to clothing, tools. fishing line & matches (and numerous other items).

When possible we try to include funding for one of these in our annual budget.

In our 4 decade plus history we have been involved in many overseas projects that have made a difference to people and their communities.

Reading through the files we have come across donations of books, wheelchairs, carving tools, other tools, a motorcycle and even a tropical piano to a South Vietnamese Hospital back in 1970.

Check out our Club History for a fascinating glimpse into our past projects.

Get in Touch. Get Involved.

Meetings are held every Wednesday at 6pm but check our calender for our latest schedule.